This project has been awarded to China Railway Design Corp. and Guangzhou Wanan Construction Supervision Co., Ltd. The DOTr is now awaiting the consultant's selection for the Design & Build Contract. Click here for reactions to this development on this page's FB community: https://www.facebook.com/MindanaoRailWatch/posts/3337085903225473

This article is divided into the following sections. Additional sections will be added as this project progresses.

Description of the project

The DOTr's own description of the project appears as follows:

The Republic of the Philippines Department of Transportation (hereinafter called “Procuring Entity”, pursuant to the applicable executive agreements between the Government of the Philippines and the Government of the People’s Republic of China (GPH-GPRC Executive Agreements) intends to apply the sum of Three Billion Ninety-Four Million Two Hundred Fifty-One Thousand Four Hundred and Twelve Pesos (Php 3,094,251,412) being the Approved Budget for the Contract (ABC) to payments under the contract for the Project Management Consultancy Services (PMCS) of the Mindanao Railway Project: Tagum-Davao-Digos Segment. Bids received in excess of the ABC shall be automatically rejected at bid opening.

The Republic of the Philippines Department of Transportation now invites bids for the Project Management Consultant (hereinafter referred to as “the PMC”) of the Mindanao Railway Project: Tagum-Davao-Digos Segment (hereinafter referred to as “MRP:TDD” or “the Project”). Completion of all the detailed design and works for revenue operation of the MRP:TDD (hereinafter referred to as “the Works”) is required within approximately 17 months and the PMC are required within approximately 33 months to cater for the pre-construction activities and the Defects Notification Period. Bidders should have completed a contract of similar nature and size to the Project. The description of an eligible bidder is contained in this document (the Bidding Documents), particularly, in Section II. Instructions to Bidders.

Bidding will be conducted through Limited Competitive Bidding procedures using non-discretionary “pass/fail” criterion as specified in the 2016 Revised Implementing Rules and Regulations (IRR) of Republic Act No. 9184 (RA 9184), otherwise known as the “Government Procurement Reform Act.”, as modified by GoP-GPRC Executive Agreements.

Status of the project

As this project evolves, this section of the article will evolve with it. Key developments are listed below as they occurred. To view the most recent update (which will also be replicated at the root of this article) proceed to the last bullet. If you are new to this project, peruse the bullet list of items in the order presented.

This was the year that the Philippines and China signed an agreement for Overseas Development Assistance (ODA) for the Mindanao Railway.

In August 2018, Finance Secretary Carlos Dominguez III announced China's willingness to co-finance Philippine infrastructure projects including the Mindanao Railway. The funds would be financed in Renminbi instead of US dollars, and would be made available in cooperation with the China International Development Cooperation Agency (CIDCA), Export-Import Bank of China (China EXIM), and the Asian Infrastructure Investment Bank (AIIB).

The agreement for a consultancy project was formalized during the state visit of Chinese President Xi Jinping to Manila in November 19, 2018.

By September 2019, the Department of Transportation and Chinese consul general in Davao City -- the site of the Mindanao Railway Project Office -- had announced a list of preliminary candidate companies for the consultancy project.

However, 2019 ended without significant progress in the selection of consultants. This lack of progress prompted Socioeconomic Planning Secretary Ernesto Pernia to lament in February 2020 that China had failed to maintain regular meetings with the DOTr. He cited that, in contrast, the Japan International Cooperation Agency (JICA) had by then conducted nine meetings since 2017.

It wasn't until October, 2020 that the DOTr and was finally able to receive the CIDCA-approved list of prospective bidders and send to bid invitations to these companies. A bid conference was held on the 19th of October 2020, and the deadline for submission of bids  was set for November 5, 2020. The conference for the opening of bids, however, was unsuccessful. 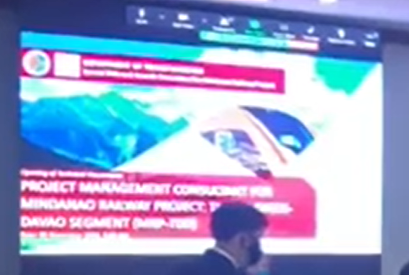 None of the participating companies were able to comply with requirements to provide a list of Filipino managers and key workers who would fill prescribed Filipino-only positions. The primary sticking point was following requirement. Click the image below to enlarge. 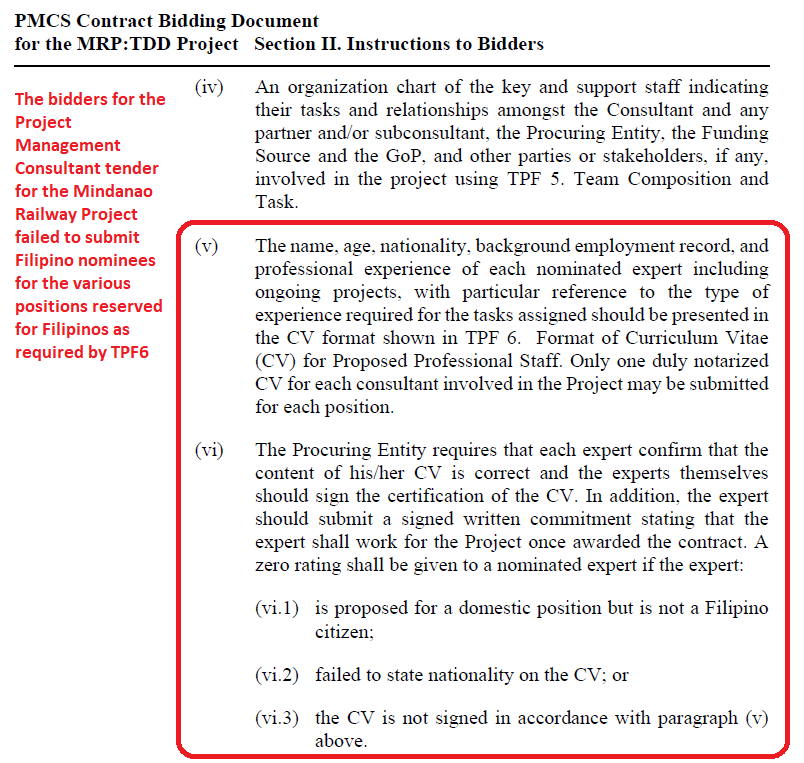 The bid documents clearly outlined the positions that were open for foreign workers, which ones were Filipino-only, and which ones could be filled by a mix of Filipino and foreign workers. Click the image below to enlarge the list.

One by one, each of the Chinese companies were notified of their failure on their submissions on the bid conference projection screen. 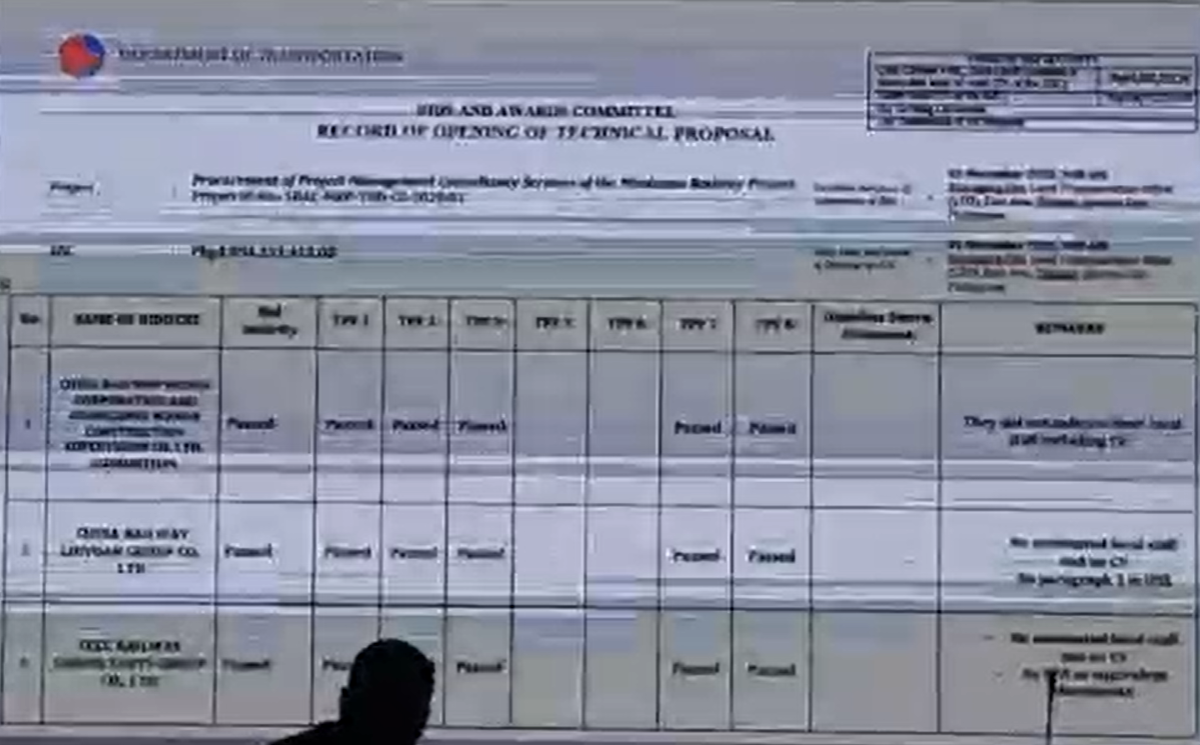 To make matters at the conference worse, the Chinese representatives of the participating companies  clearly lacked sufficient command of the English language to understand the clarification questions posed to them by the DOTr. A polite, but mildly frustrated, Assistant Secretary Eymard Eje found himself repeatedly asking the question "Would you like to submit a motion for reconsideration?" to a woefully unprepared audience. One of whom resorted to using a voice translator on her smart phone in an attempt to understand the DOTr's questions.

The DOTr, for its part, was not prepared for a potential language gap during the proceedings. The department had not retained the services of a translator.

Following the failure of the first bid conference, a re-bid was announced.

The pre-bid conference for the re-bid took place on the 17th of December at 2PM (GMT +8). The proceedings were streamed to the public via Facebook live. (See part 1 and part 2). 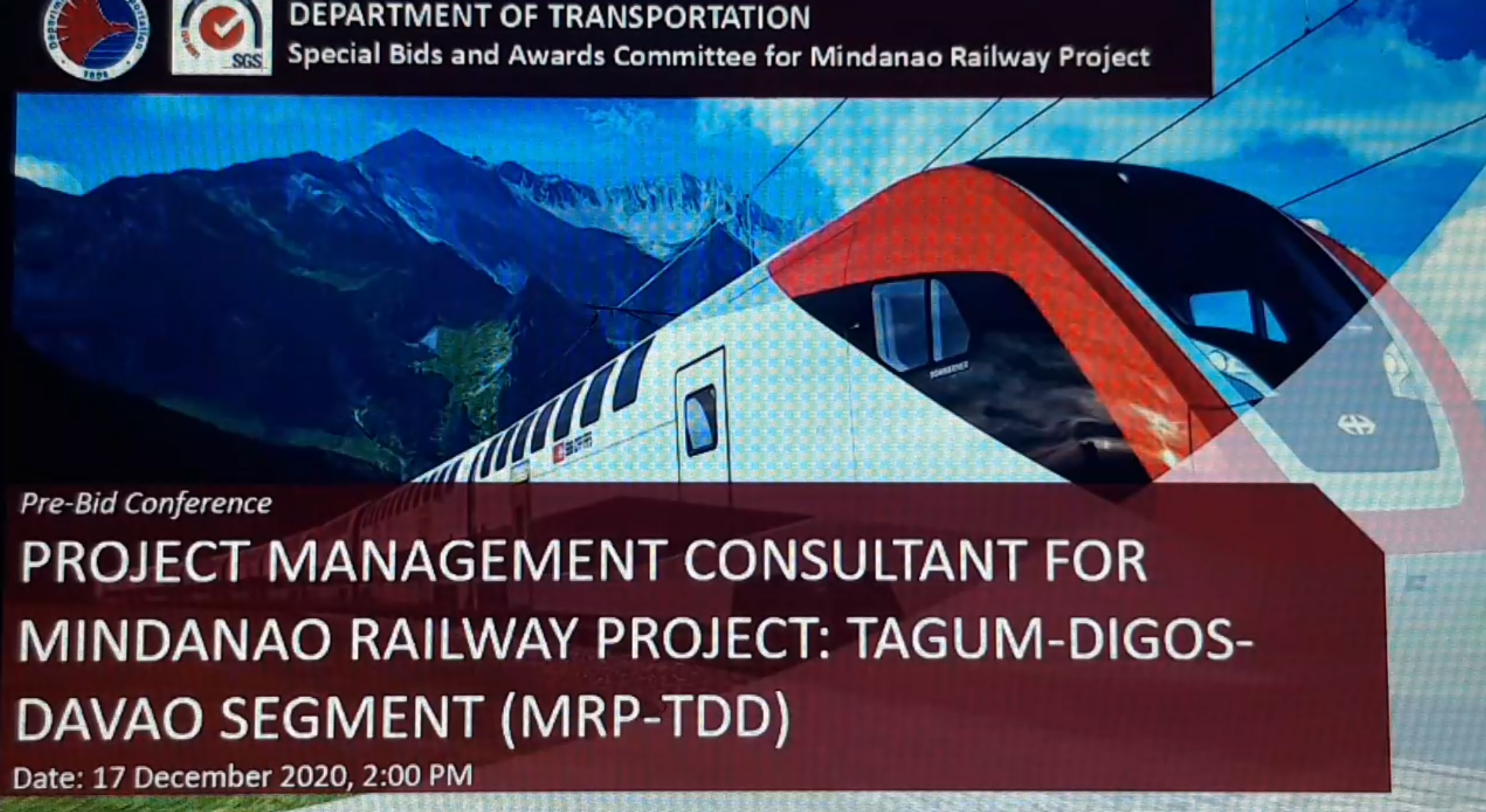 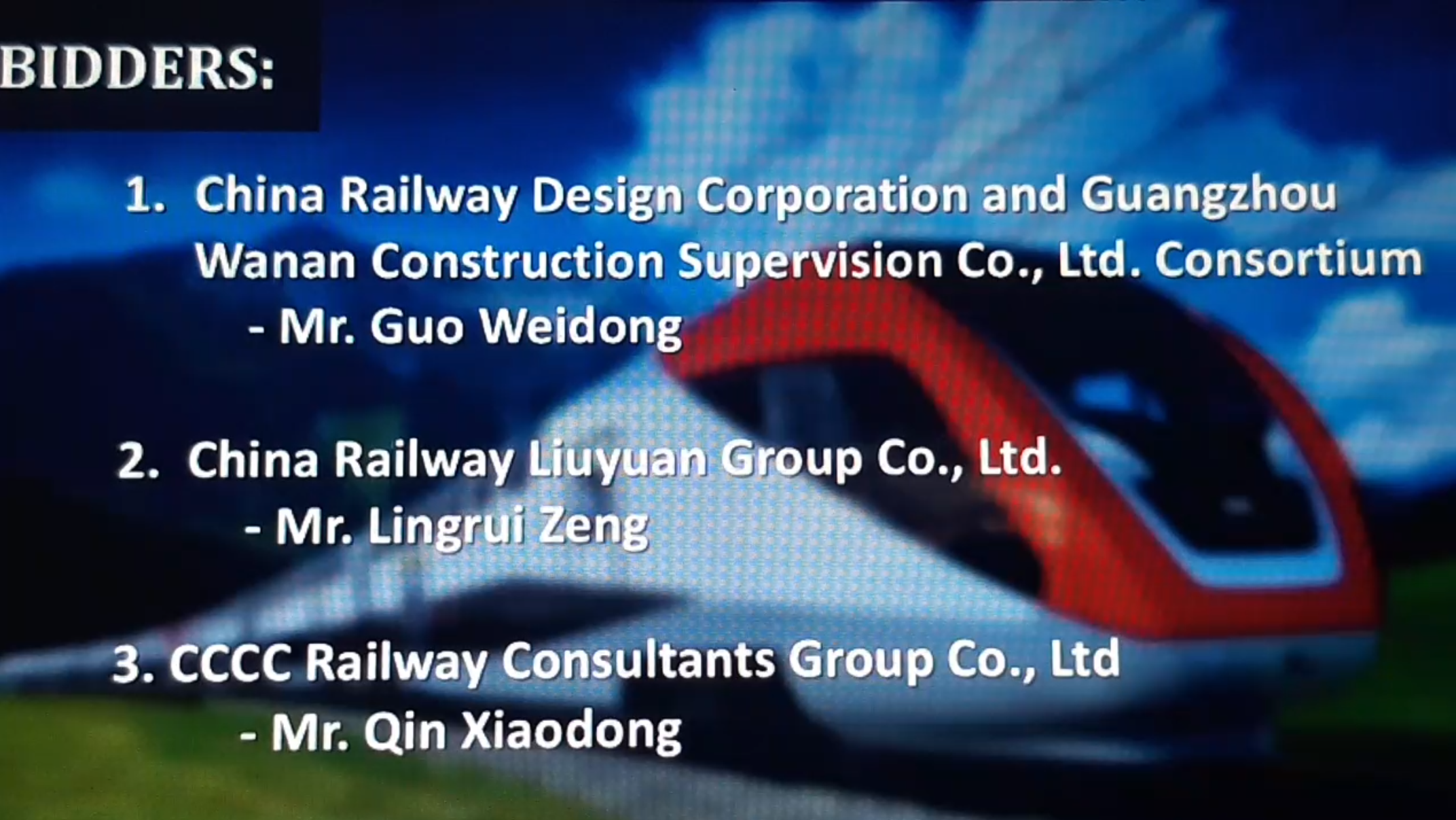 There were no significant questions at the conference beyond a query from China Railway Design Corp about the suitability of their existing power of attorney that they originally sought for the first bid. The event ended with the DOTr emphasizing to the bidders that the deadline for the submission of bids was January the 4th 2021.

The second bid conference proceeded better than the first. Between the consensus achieved during the pre-bid conference, and supplemental bid bulletins in the week prior to the conference itself the bidders -- this time -- were better  able to submit the documents that the DOTr required.

However, it appears that the requirement to pre-identify key Filipino personnel that would be part of management and technical staff had been waived for the conference. Despite this, local involvement remains a requirement for the project. Eventual compliance with this stipulation will remain a key "watchdog item" for this group moving forward.

The following bidders submitted their documents on the 4th of January, 2021.

The proceedings were streamed on the DOTr's FB account here. Members of the Bids and Awards Committee acknowledged receipt of complete documentation from the following bidders at the indicated time stamps in the recording above.

While all bidders were able to submit their requirements, CCCC Railway Consultants Group failed to sign the document referred to as TPF1. For this reason, CCCC became the sole bidder that was deemed "not compliant". The submissions from the two remaining bidders were accepted.

As with the previous bid, CCCC was given three days to file a motion for reconsideration for their defective bid -- and the company yet again failed to send representatives that would understand the language of the proceedings. Neither the company's attendee, nor the disembodied voice that the attendee had on speaker phone could understand what a motion for reconsideration was. 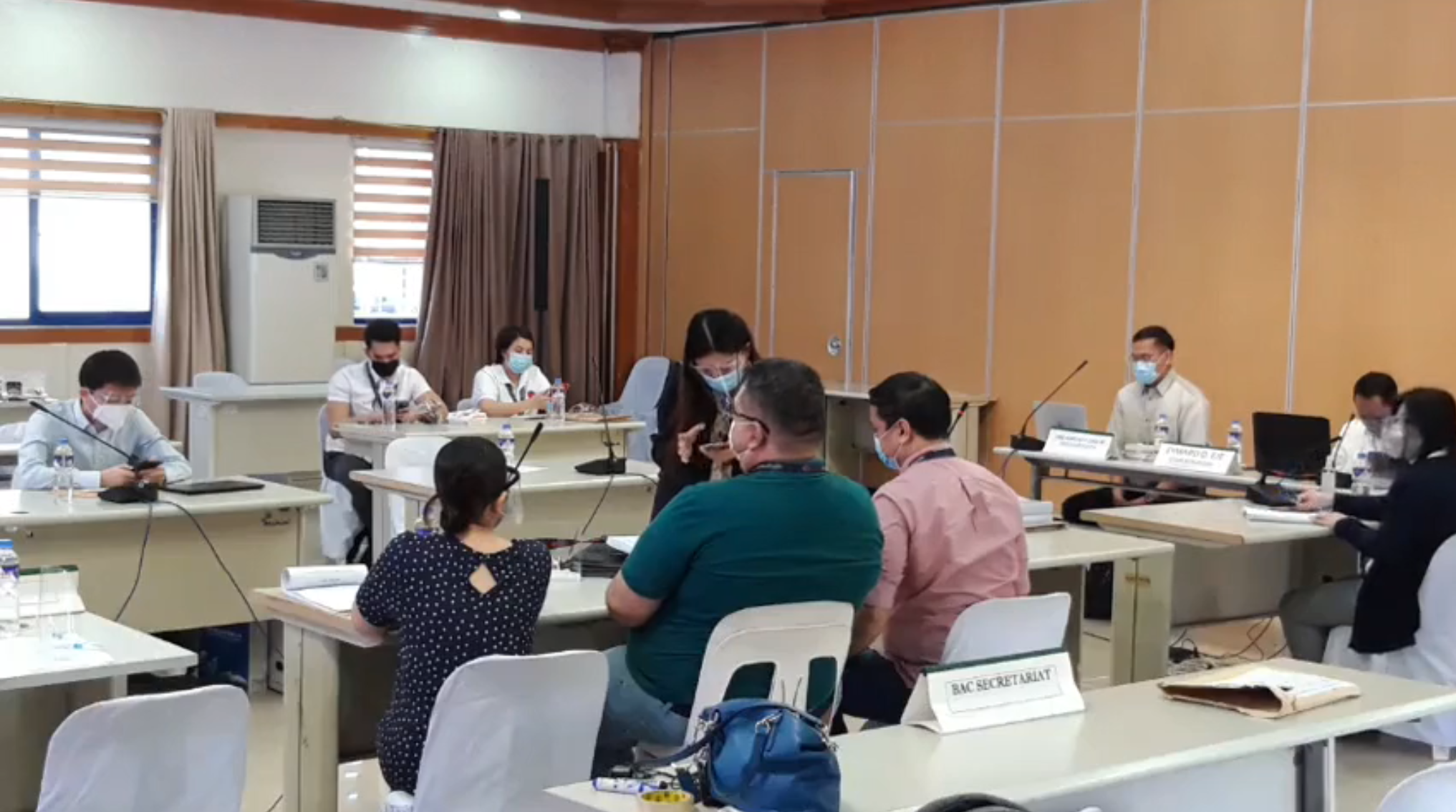 The official summary of this bid conference was originally scheduled to be published on January 11, 2021.

However the Mindanao Railway Project Office (MRPO) did take part in the "Mindanao Speaks Up" forum on February 10, 2021 where they provided updates on the status of the project and the PMC in particular. Mindanao Railway Watchers participated in this forum via Zoom. 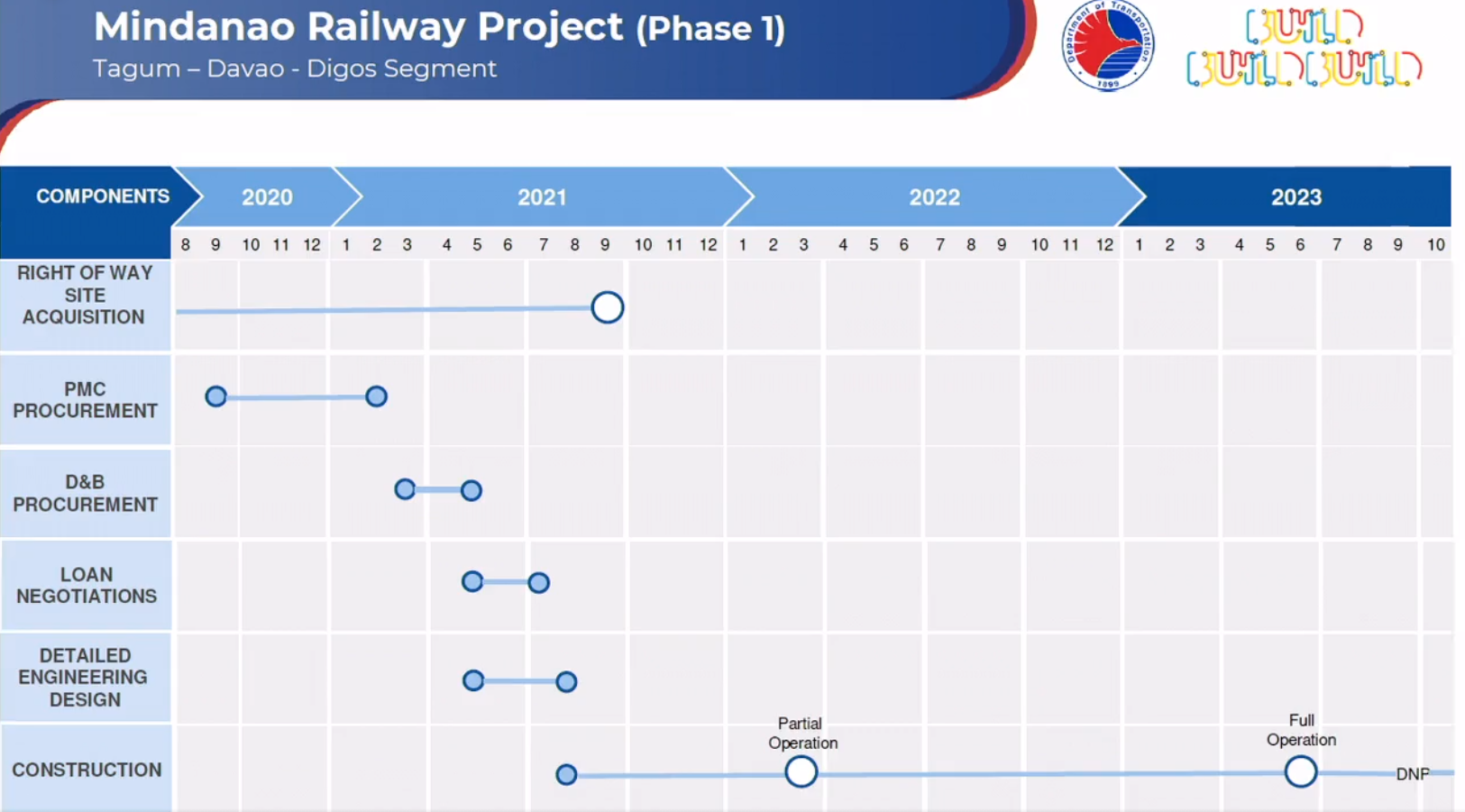 The timeline also highlighted the next procurement project that will come on the heels of the PMC project: The Design & Build (D&B) contract.

On March 16, the Technical Working Group for the MRP opened the sealed bid submitted by the China Railway Design Corporation (CRDC). 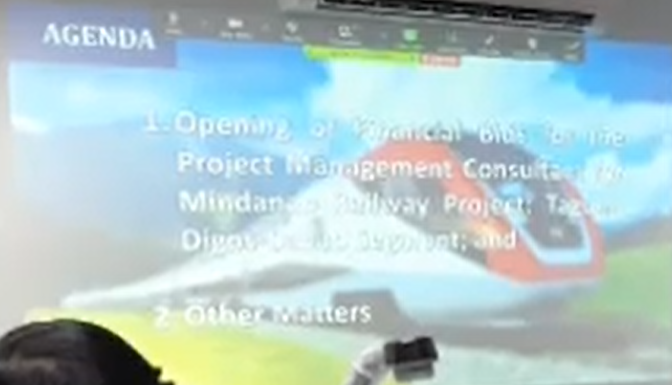 After confirming that all documents on the official bid checklist were in order, Assistant Secretary Eymard Eje announced at the proceedings that CRDC's bid was P3,084,903,377 that it was within the Authorized Budget for Contract (ABC). 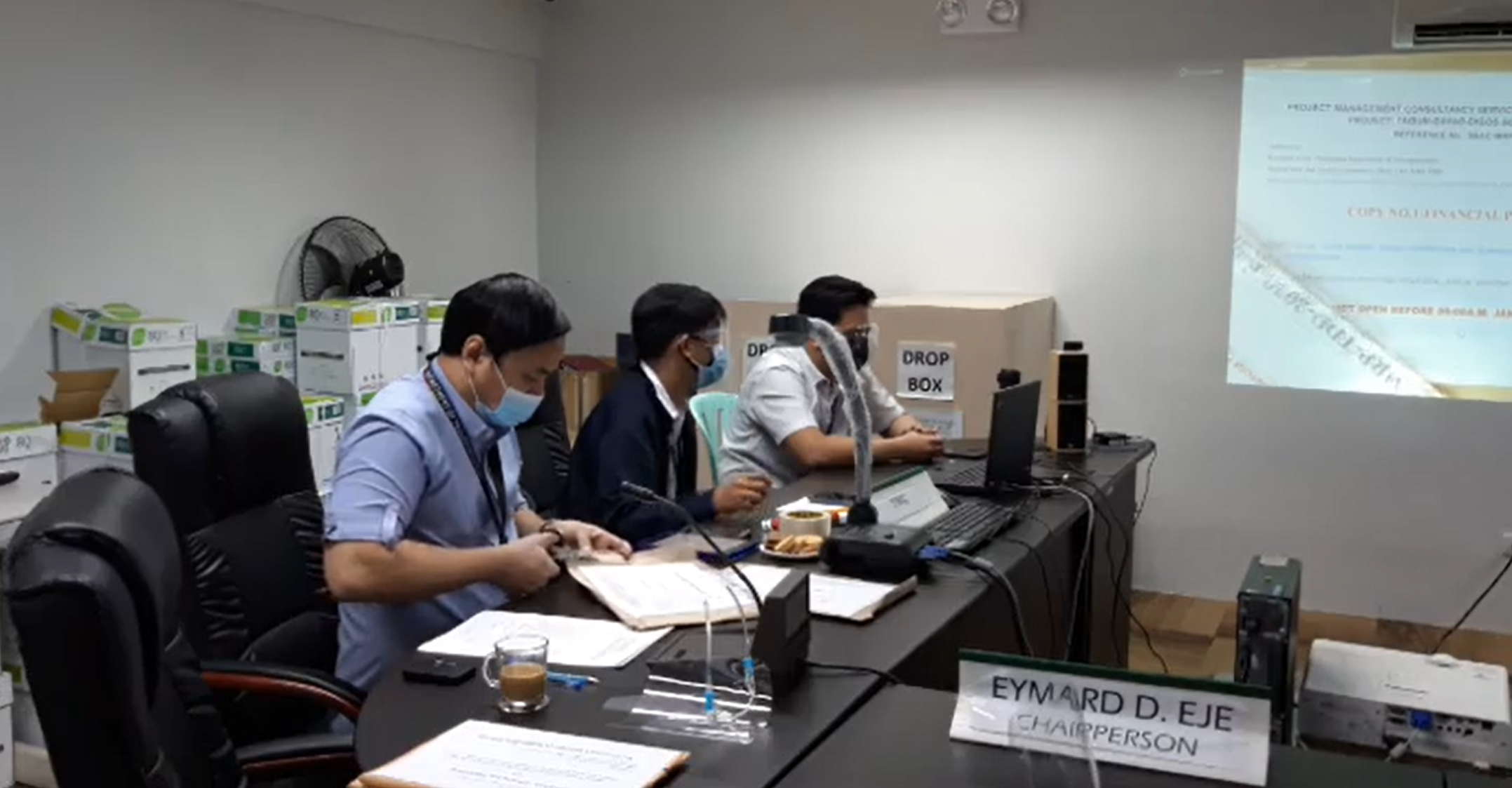 The Technical Working Group reported that they expect to complete the detailed evaluation of the proposal by March 18, 2021. 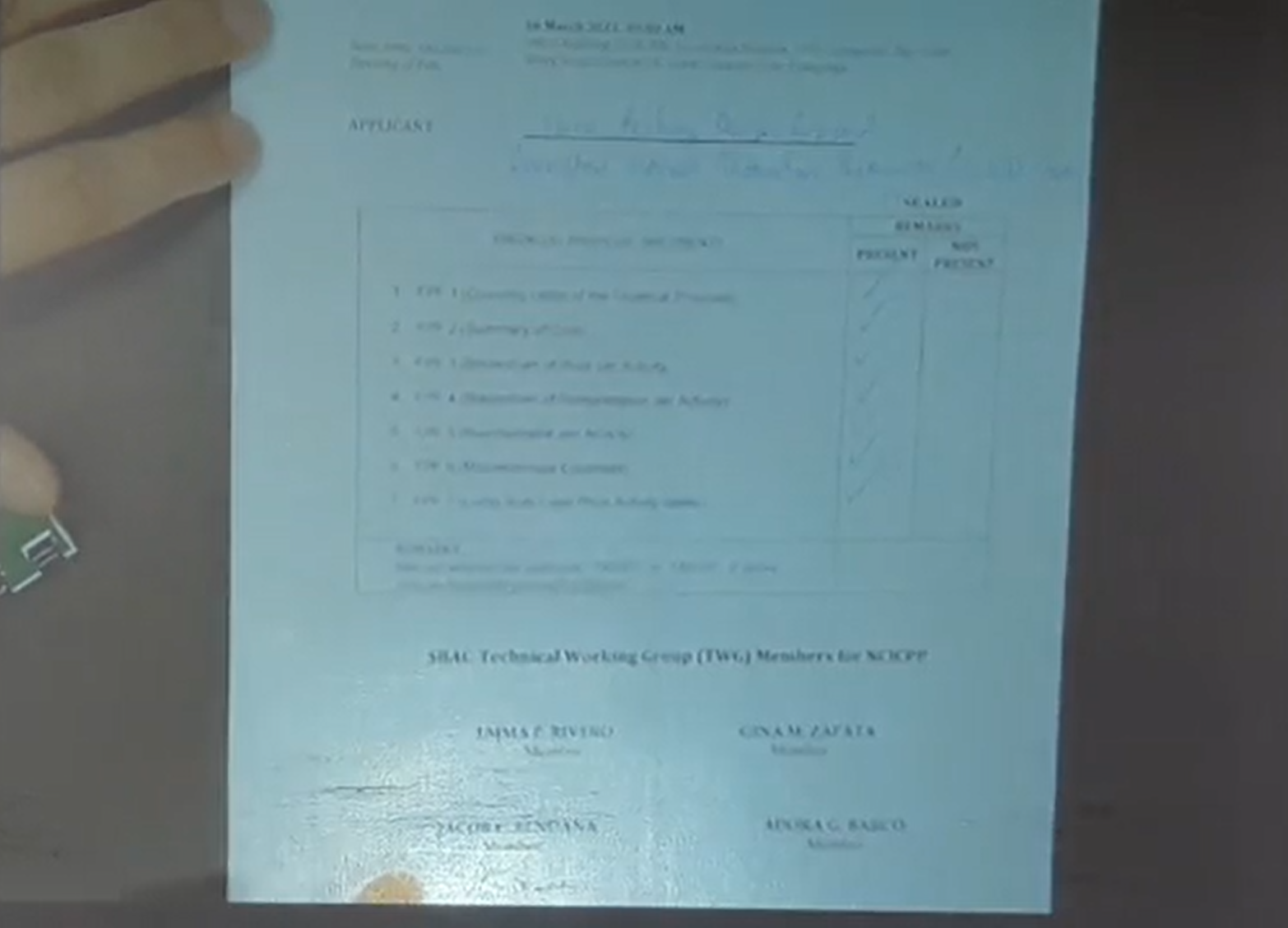 The DOTr announced to media that China Railway Design Corp. and Guangzhou Wanan Construction Supervision Co., Ltd had been awarded the Project Management Consultancy project worth P3.08B. The contract was awarded on the 3rd of August, 2021, and announced to media the following Monday.

The following Notice of Award was posted on the DOTr website. 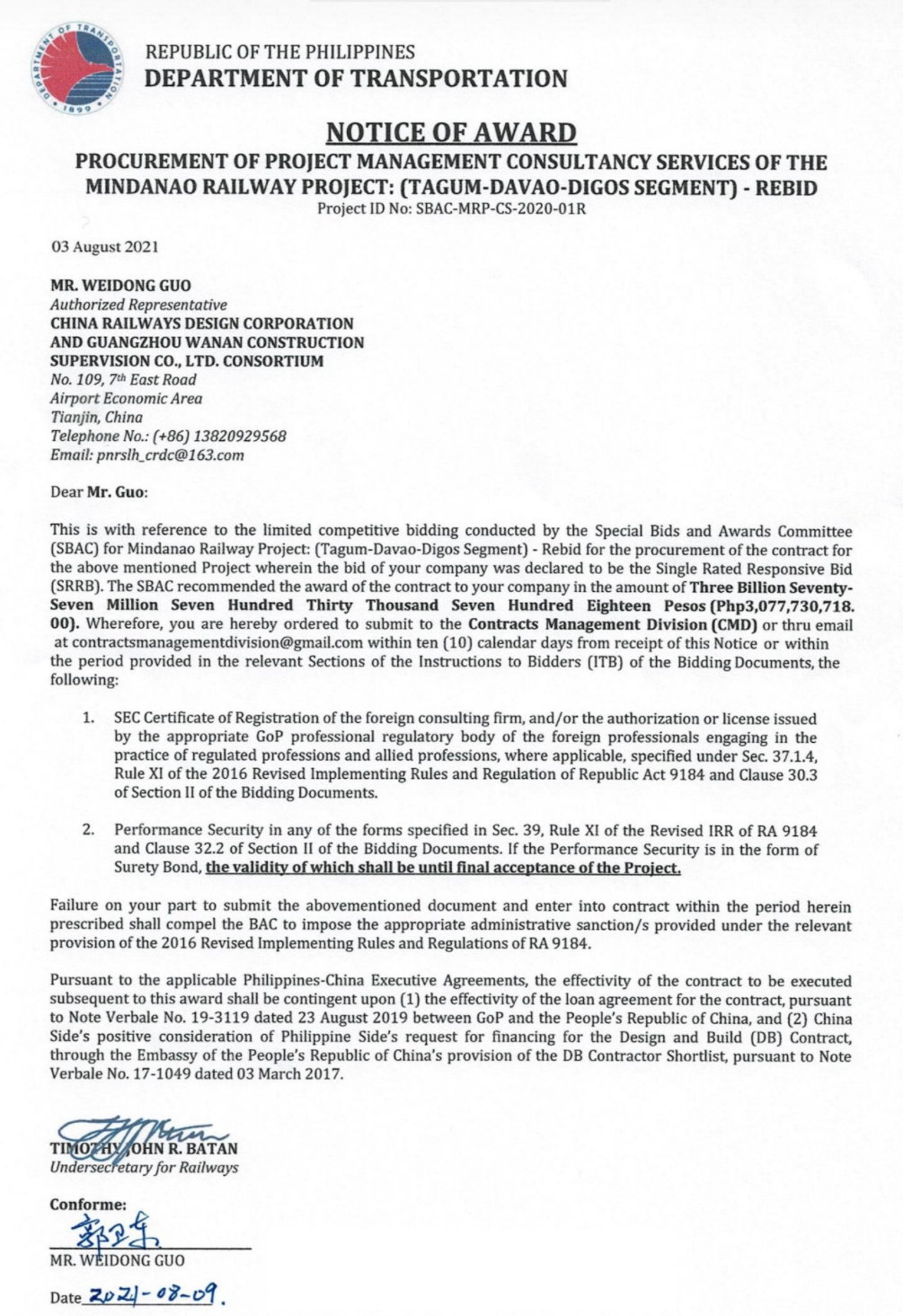 With the award of the PMC contract, the DOTr needed to allocate funds for advanced and progress payments through the course of 2022. However, the Department of Budget & Management failed to include the Mindanao Railway Project in the National Expenditure Plan for 2022. According to Asst. Secretary Goddes Hope Libiran, the DOTr would have needed an additional P2B for these payments.

Transportation Assistant Secretary Eymard Eje, however, noted that the failure to allocate would funds would not impact ongoing "ground activities". This presumably includes right-of-way acquisitions.

On October 20, 2021, the Department of Transportation (DOTr) streamed the signing of the contact between the DOTr and China Railway Design Corporation for the Project Management Consultant project.