Where should the 2nd Phase of the Mindanao Railway Project be?

Conventional wisdom attributes the selection of the Tagum-Davao-Digos route as Phase 1 of the Mindanao Railway to fact that the President that designated the railway project a "flagship project" hails from Davao City. Pundits had chalked the decision to a classic case of "to the political victors go the spoils". While there is merit to this jaded conclusion, it is also prudent to consider the economic justification for this course of action.

Let us explore this in the following sections:

The oldest railway system in the Philippines is the Luzon-based Philippine National Railways (PNR). At its height, the system maintained 797 kilometers of track from La Union to Bicol. By 2014 however, this coverage had shrunk to less than 100km of track. Less than the intended length of track for Phase 1 of the Mindanao Railway.

To protect the billions of pesos that are earmarked for the implementation of the Mindanao Railway, it is important to understand how and why the PNR declined to its current state. Lessons must be learned to avoid repeating them with the MRS.

Based on the experience of the Philippine National Railways (PNR), its path to degradation and decay was accelerated, in no small measure, to its over-dependence on passenger traffic as its primary source of revenue and the loss of its freight business. PNR General Manager Junn Magno explained the importance of cargo traffic to the PNR's future in this interview given to Bicol media. (Proceed to time index: 3:00). 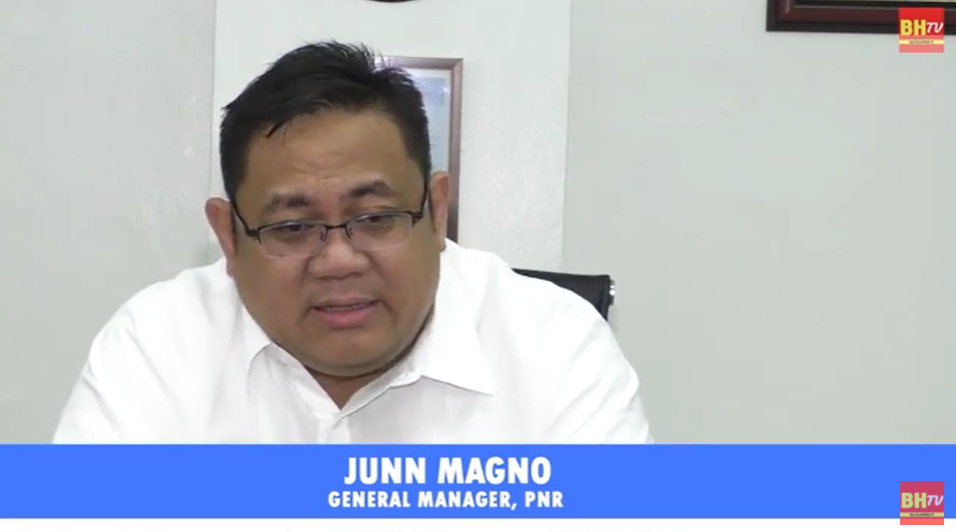 The following Philippine Daily Express article from 1983, shared by Gorio Belen on the Philippine Railway Historical Society FB page, reinforced GM Magno's point above. It summarizes what happens when a railway is overly dependent on government subsidies to stay operational and lacks measures to achieve a measure of profitability. 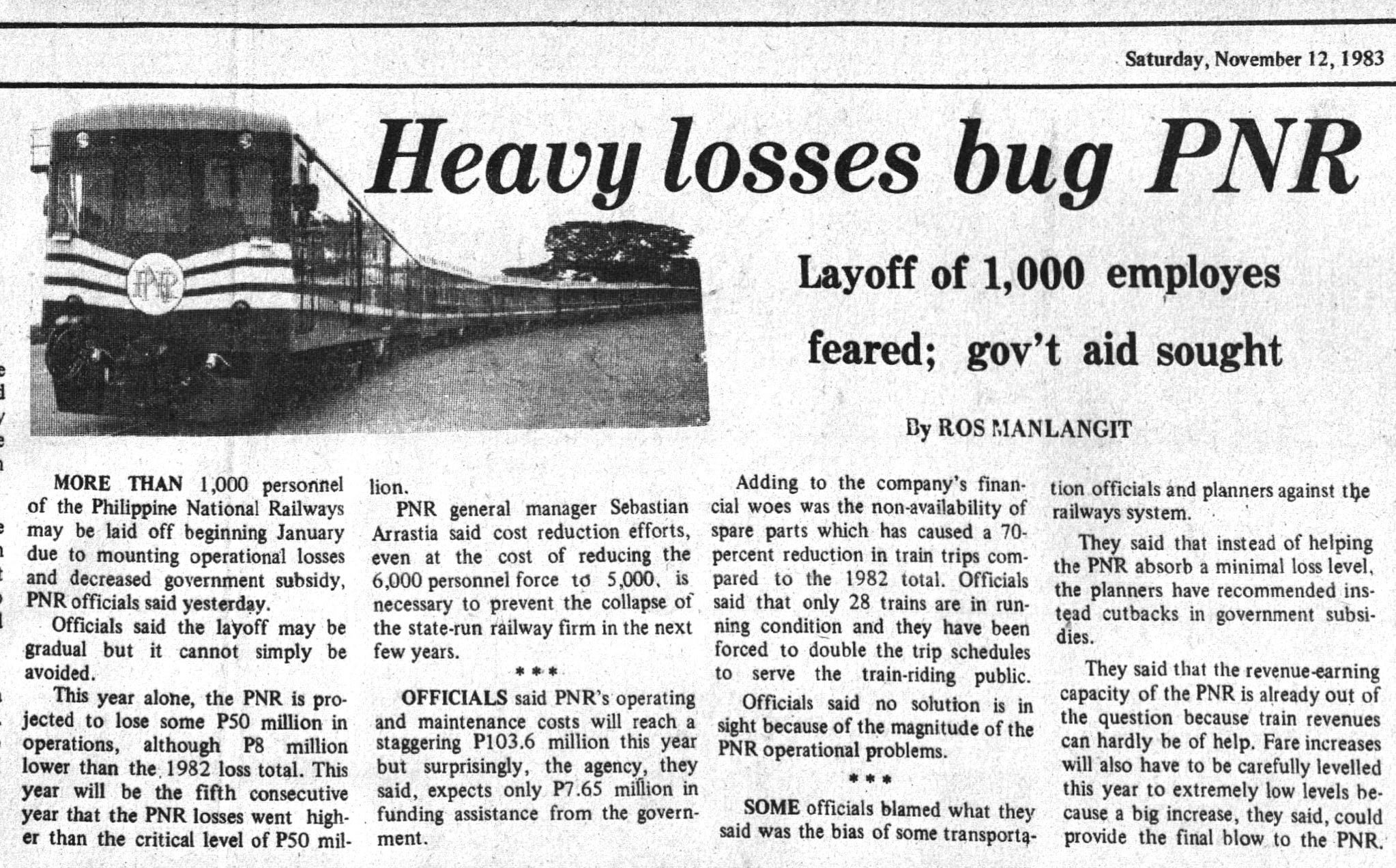 Therefore, if the Mindanao Railway is to be given a proper jump-start in its operations, it is important that its inaugural phase be situated in the most economically vibrant region of Mindanao.

The strength of the regional economy matters

A sustainable railway is one that will not only fill passenger seats, but will also support commercial needs. According to a study funded by the World Bank (see page 36).

Railways cost structures are at their most highly competitive when railways can operate large trains, well-loaded with traffic, over a heavily used network, by organizations with a lean and market-oriented corporate management. Train size and payload provide train operating economies; train density plus heavy network use provide infrastructure economies; and corporate structure yields administrative overhead economies.

These findings match the the PNR's own experience. Railways must be maximized to be profitable, and freight traffic is key.

As shown in the following table -- with data drawn from the Philippines Statistics Authority -- the Davao Region has consistently been the stronger regional economy in Mindanao. This gives it an advantage in generating kind of the activity that would maximize a railway. 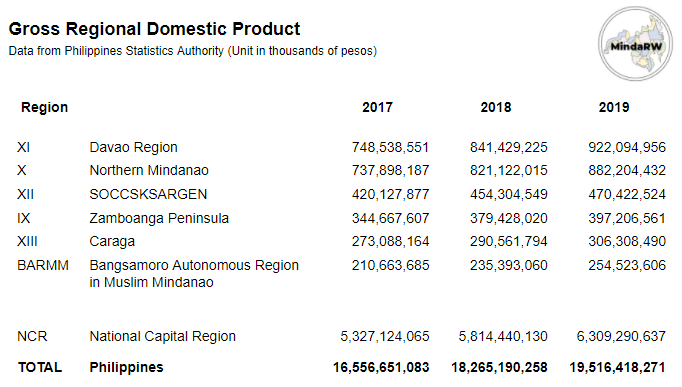 In addition to the Davao Region's economic advantage, there is also the matter of population density. A relatively larger concentration of potential passengers also presented a key consideration. 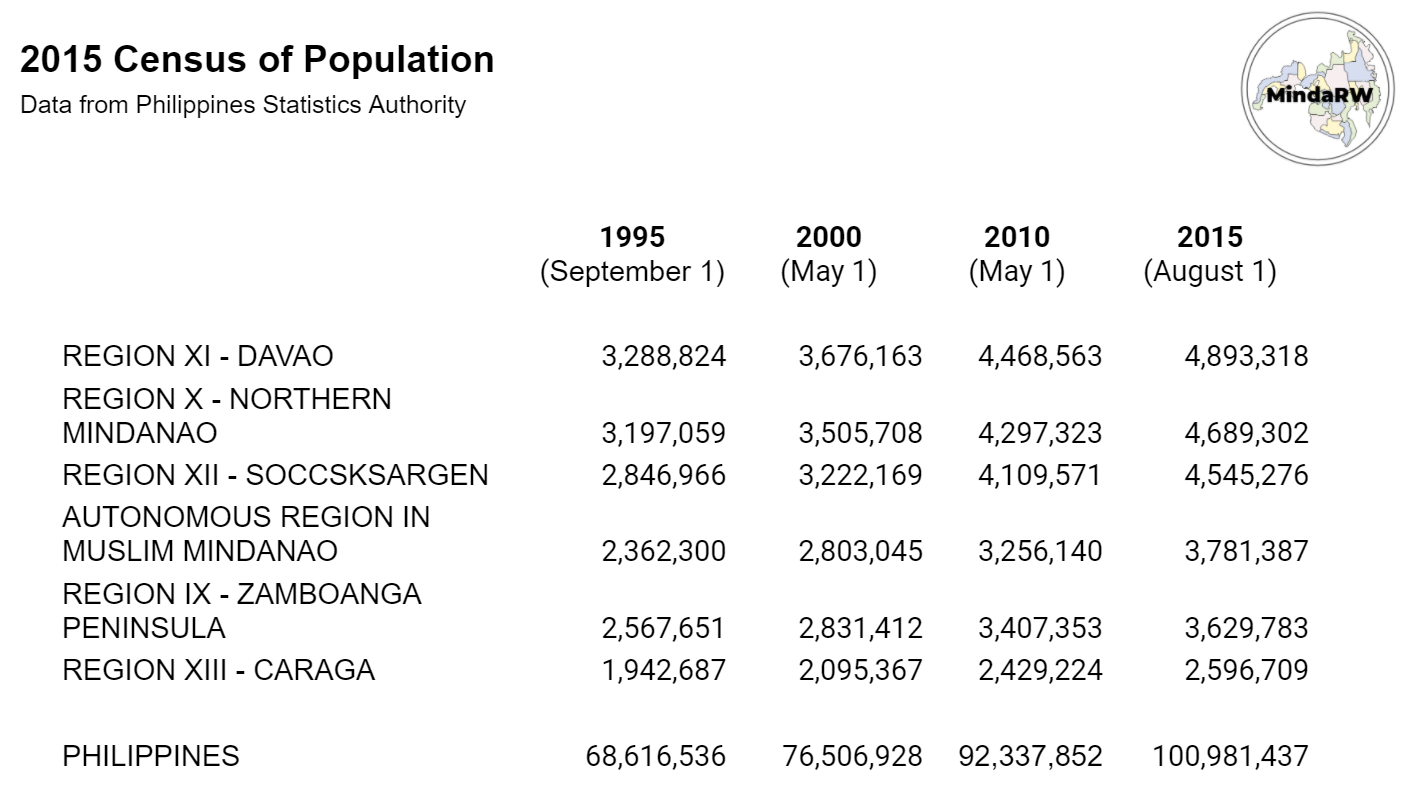 Prior to the Duterte administration, discussions about the Mindanao Railway had always centered around Cagayan de Oro as being the most likely hub for the system. In addition to vocal support by prominent national leaders such as Senator Aquilino Pimentel, the prevalence of heavy industry in Northern Mindanao also made it a serious contender as a starting point for the railway system. It remains a consistent close second to Davao in terms of both economic strength and population -- as per PSA data.

The ground work for the Tagum-Davao-Digos leg of the railway is already well underway. The surveys have been completed, notices to homeowners have all already been sent out. Phase 1 will be in Davao.

The only question remaining at this point is: Where will Phase 2 be?

The answer to this may lie in a recent presentation to Congress. Atty. Clipton Solamo, Project Manager for the Mindanao Railway Project Management Office, gave the House of Representatives an update on the Mindanao Railway Project on October 23, 2020. There, Atty. Solamo revealed that the MRPO was looking into starting feasibility studies for a railway to Koronadal and General Santos City -- in the SOKSARGEN region. The presentation used for the update appears below. 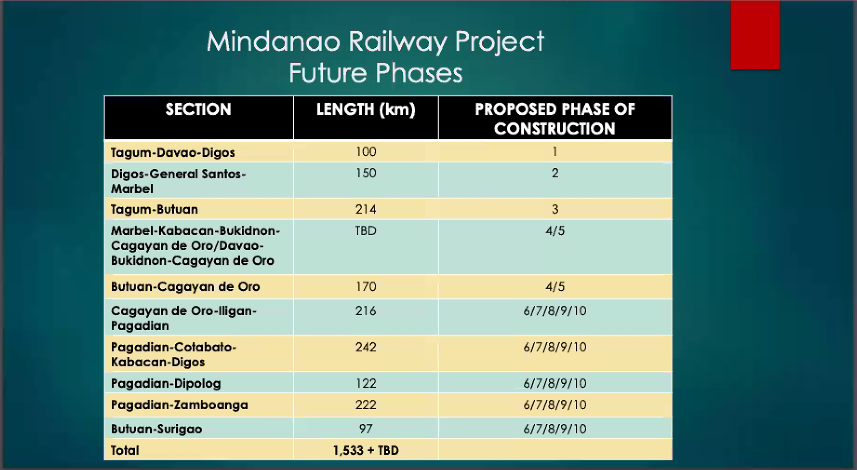 This selection is reportedly not yet final as the study for this southbound phase has yet to yet started. The DOTr has NOT issued an official public summary for the table above. Therefore, what follows is speculative and based solely on an analysis of open-source information.

But the following are reasonable justifications for prioritizing the Digos-General Santos-Marbel route. Points for comparison between a northern and a southern expansion of the the railway given the location of Phase 1 is not as straight-forward as one would think.

While Northern Mindanao has a significantly stronger economy than SOKSARGEN, General Santos -- one of the destination cities -- is significantly closer to Davao City than Cagayan de Oro. Even if the southern line is extended to Koronadal City, it would only add an addition 58km to the Phase, which would still be shorter than a line to Cagayan de Oro via Bukidnon. This would make for a shorter, and thus more affordable, railway. Resulting in a more favorable rate of return

While the alignment survey for both lines have yet to be completed, a line through Bukidnon would arguably traverse more challenging terrain than a line to General Santos and Koronadal. It is worth noting that the terrain that the Tagum-Davao-Digos railway traversed is the reason by the two-track railways was modified to a single-track railway to manage project cost.

Further study is required to ascertain if the significantly stronger economy of Northern Mindanao, compared to SOKSARGEN, would offset the increased cost.

At the Mindanao Speaks Up forum that Mindanao Development Authority organized in February 10, 2021 Niel Bonto, from the MRPO, updated attendees on the status on Phase 2 of the railway. The next phase would connect the Davao Region with General Santos City and Marbel. Negotiations with China had been proceeding quietly for months, and by July 2020, terms of reference for the conduct of the feasibility study had already been drafted. The DOTr was simply awaiting confirmation of the start of the study by a Chinese contractor. 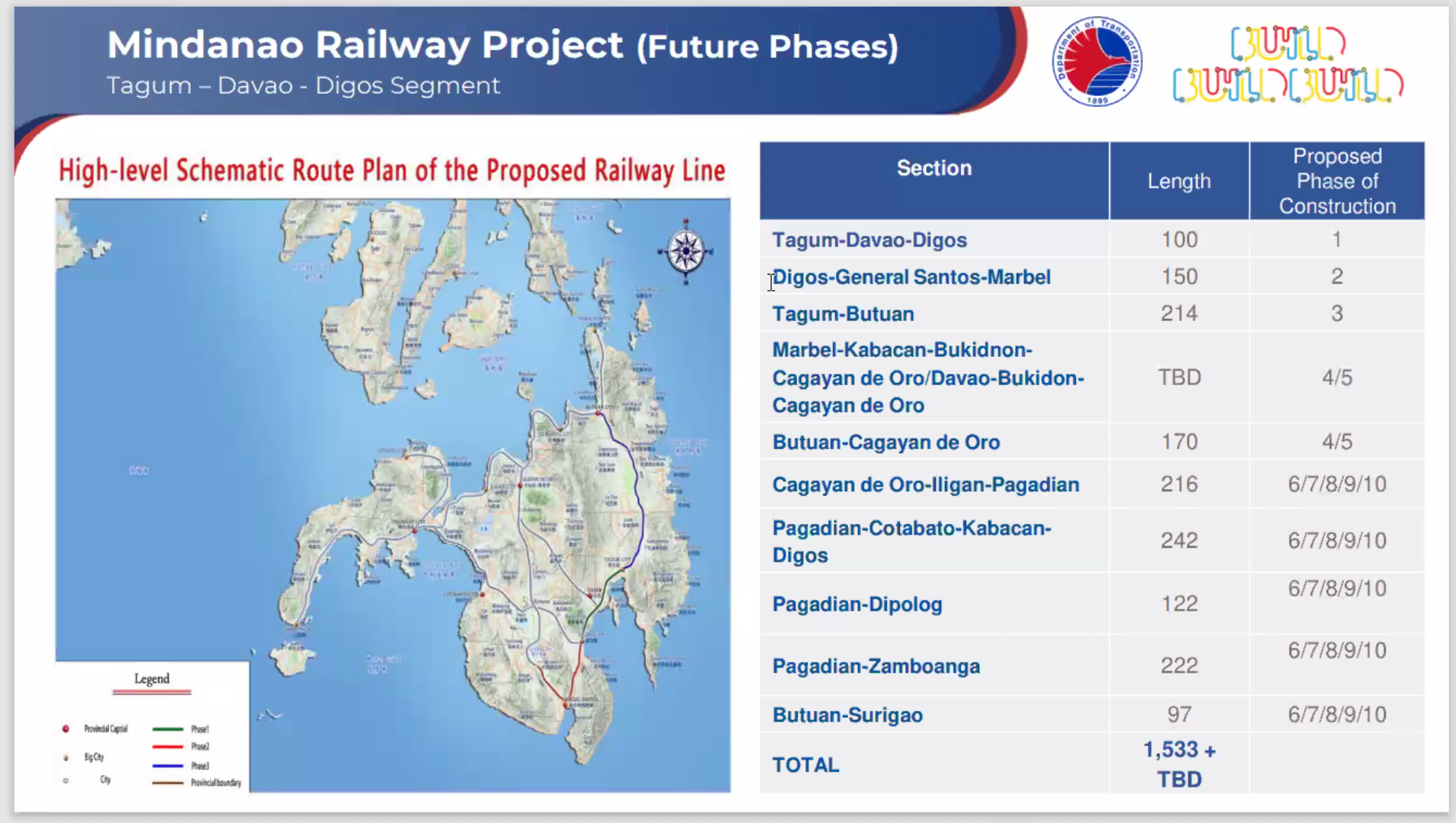